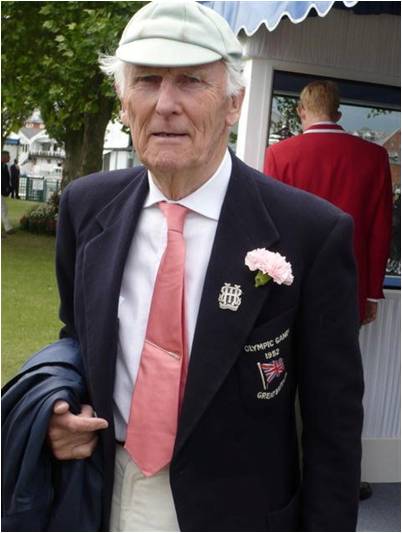 Born in 1926, Bill Windham was educated at Bedford School (Scholar) and Christ’s College, Cambridge (Scholar and Double First in Mechanical Sciences and University Prizewinner). Bill’s career was spent with Arthur Guinness Son & Co. (GB) between 1947-1984 and was Chairman of Skelmersdale New Town Development Corporation between 1979-1985.

Bill was Captain of Boats at Bedford in 1944 and first rowed at Henley in the Open Race for the Danesfield Cup for Christ’s College, Cambridge in 1945. He competed on many more occasions at Henley for Leander Club and was Captain in 1953. In 1949, 1952 and 1953 he was in the Leander crew that won The Grand Challenge Cup and in 1953 also won The Stewards’ Challenge Cup.

A Cambridge Blue, Bill was the last surviving Leander member of the 1940’s Boat Race, competing in 1947 and 1951; Cambridge winning in both years. The winner of the 1951 Boat Race was invited to compete in a Regatta on the Charles River, Boston to celebrate the 175th anniversary of Paul Revere’s ride during the War of Independence. Cambridge beat Harvard, Boston University and MIT to win a replica of the Paul Revere silver bowl. Bill also competed in Eights in the Empire Games in New Zealand in 1950 (3rd), in the European Championships in Milan in 1950 (3rd) and in Macon in 1951 (1st). He also competed in the 1952 Olympics in Helsinki (4th). He was awarded the Desborough Medal in 1953.

Bill Windham was elected a Steward of Henley Royal Regatta in 1953 and served as a Member of the Committee of Management between 1972-1994. He was President of Leander Club from 1993-1998 following two fellow Olympic rowers, Kenneth Payne and Richard Burnell. His Presidency will be remembered for two very significant events. The first was the commencement of the rebuilding of the Clubhouse, a far- sighted and complex project that he worked hard to promote. The second was the change in the rules of the Club that would, at last, allow women to be Members. While this momentous change also carried Bill’s support, he later admitted that chairing the notably well attended and lively Annual General Meeting, at which the motion was tabled, had not been ‘the easiest day in his life’.