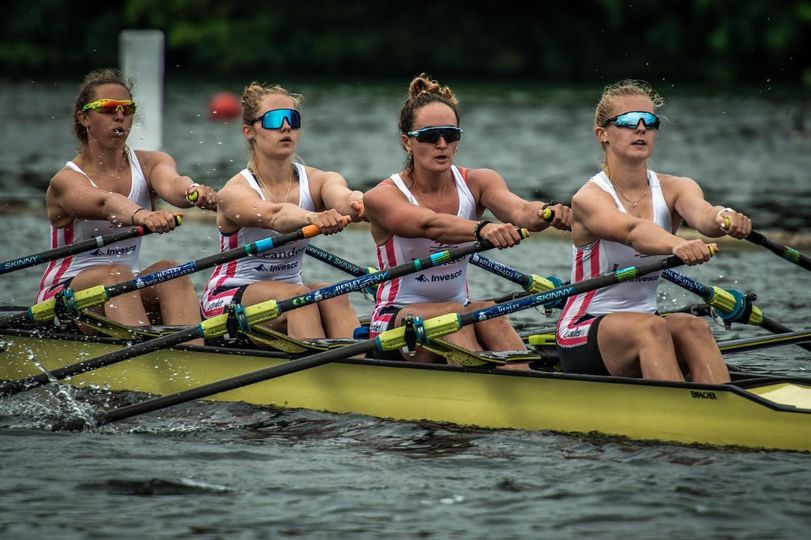 Photo thanks to Felix Dieu

The weekend saw the return of the Leander Women’s squad to Henley Women’s Regatta.

Leander had a total of 35 athletes in eight different crews, entered across five different Championship events. Five of these crews reached the finals on Sunday.

On what was a day for record breaking conditions, the Leander Women’s pair of Sophia Heath and Annie Campbell-Orde started the winning charge, beating Imperial College London and setting a new course record.

Next up the women’s four of Issy Hawes, Issy Powell, Juliette Perry and Sam Courty raced a formidable crew from Brown University (USA).  The determination of the Brown crew never let up and pushed the Leander women to a win equalling the previous course record.

Attention then turned to the women’s sculling squad. The strength and depth in the Leander women’s team was evident in the double sculls final.  The full Leander crew of Imogen Magner and Kathyrn Mole faced an U23 composite crew of Katherine George (Leander) and Vwaire Obukohwo (Twickenham).  Both doubles raced stroke for stroke for the first 700m, before the power of the composite crew took the overall victory.

Another Leander vs Brown showdown completed the day’s racing in the women’s quad with Leander athletes Xanthe Weatherhead, Rosa Thomson, Tash Harris-White and Jess Martin.  The tenacity of the Brown crew pushed the Leander women for the whole track. The composure and power of the Leander women showed as they stepped out to win by two-thirds of a length.

Chief Coach Ross Hunter commented: “I am so proud of our women. These wins and results are the collective effort of our whole women’s team and coaching staff of Rob Morgan, Katherine Copeland and Richard Chambers. The Henley Women’s Regatta team have again put on a world leading event.  I want to thank them all for their work and effort into setting up and running the event.”

Attention now turns to Henley Royal Regatta where the Leander men and women will come together to compete on their home stretch. Crews and racing information will be posted on our website and Leander’s social media prior to the regatta starting.