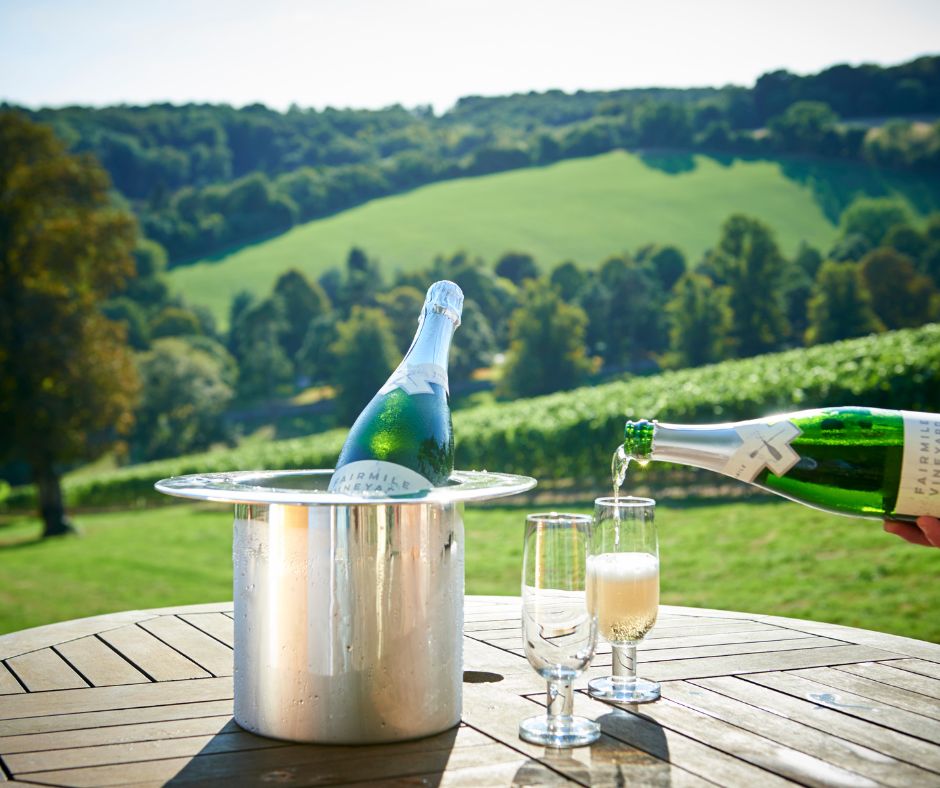 What could be more appealing than spending an August afternoon wine tasting on vineyard slopes high above circling red kites, followed by a luxury Leander Club picnic?

Leander Club has joined forces with Fairmile Vineyard to offer our Members the chance to go on an exclusive tour of Henley’s very own vineyard on Friday 26th August at 11.30am. We’ll send luxury picnic hampers up to the vineyard for you to enjoy after your tasting and tour.

In 2011, local couple Jan and Anthea Mirkowski recognised that the foothills of the Chilterns on the outskirts of Henley would provide the ideal terrain and microclimate for viticulture. The steep south-facing slope helps vines capture the most sunlight – 30% more sunlight during late summer, when the grapes are ripening, and the sun low on the horizon, than if the vines were planted on level ground. Vines prefer well-drained soil, and Fairmile Vineyard lies on the same flinty chalky marl that stretches across South-East England to the white cliffs of Dover, then under the Channel into Northern France.

Henley-on-Thames has a similar climate to Northern France, whose capital of the Champagne Region, Epernay, lies just 150miles south in latitude. The relatively cool nights enable grapes to retain the acidity essential for sparkling wines. In 2013, Fairmile Vineyard planted the same three grape varieties which traditionally go into the world’s greatest fizz – Pinot Noir, Pinot Meunier, and Chardonnay. 12,000 rootstocks were established across three hectares. Three great summers helped the plants establish strong root systems. The first harvest was picked in 2015 to turn it into white and rosé sparkling wines which reflect the character of Henley and its area of outstanding natural beauty.

Tickets are £30 and are limited to 20 people. To book, please email events@leander.co.uk, quoting ‘Vineyard Picnic’.