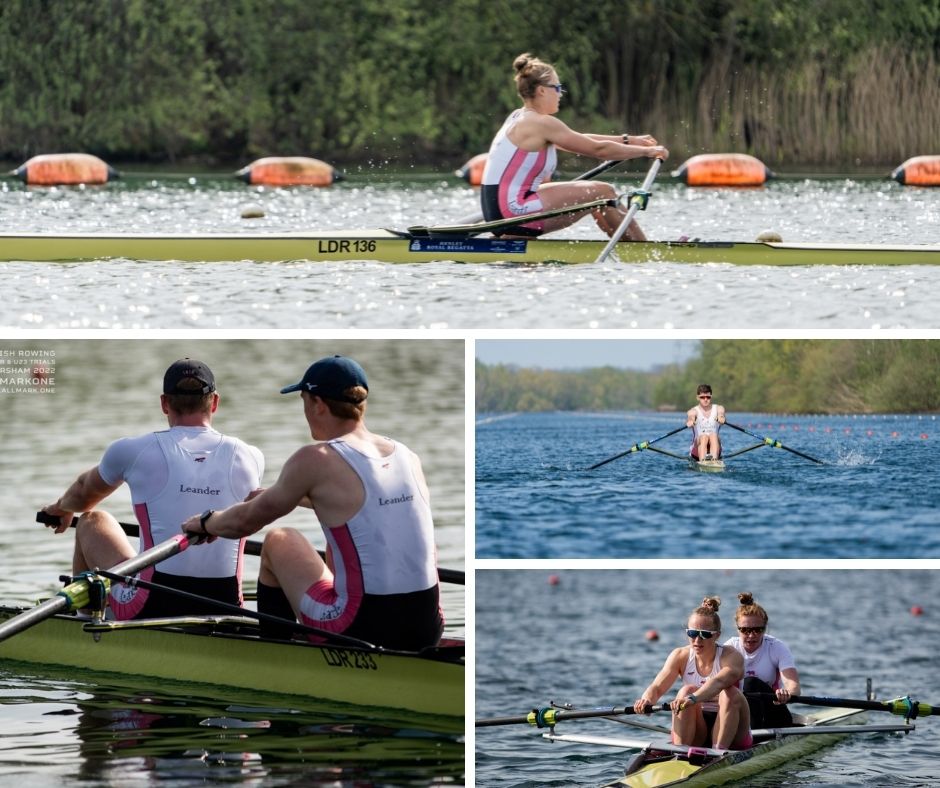 This weekend saw the return of British Rowing April trials for the first time since 2019. Forty-nine Leander Club athletes were invited to trial for Senior and U23 GBR representation. Racing on Saturday started with a time trial and then moved to semi-finals which would determine the finals athletes would race in. Sixteen Leander Club athletes made A finals which raced on Sunday, in variable and warm conditions.

Leander Club’s Lola Anderson and Georgina Brayshaw were the top two seeded scullers going into the A Final of this event.  Both Lola and Georgina made their intentions clear from early on by leading the rest of the field at the first 500m marker. Both athletes then continued to step out with Lola having the most impact. Lola, who won a bronze medal at the 2021 World Cup 3 in Sabaudia, continued to lead through each marker with Georgina hot on her heels. At the finish line Lola took the victory, Georgina in 2nd and Kyra Edwards from Nottingham in 3rd place.

After racing Lola said: “It was great to be part of some competitive racing at these trials. I’m extremely grateful to represent my club alongside many other strong Leander athletes. I’m pleased with my first April trials win and to have the opportunity to share it with amazing team mates and support staff.”

This was a star-studded field with Leander Club’s Olympic Bronze medallists Harry Leask and Tom Barras racing. Seb Deveraux, also of Leander Club was the quickest of the pack to the 500m mark. The determination of Tom and Harry then saw them draw level with Seb, eventually passing him by the 1000m mark. However, it was Tokyo 4th place Graeme Thomas of Agecroft who showed the fastest speed in the second half of the race, eventually taking a marginal win in a very competitive race.  Harry finished 2nd, Tom finished 3rd and Seb finished 4th. Club-based athletes Oliver Costly and Bryn Ellery finished 2nd and 3rd respectively in the B-Final.

The Leander Club women made up half of the total entry in this women’s event with nine of the 12 A Finalists from the club. Both National Team pairs made up of Rowan Mckellar, Rebecca Shorten (Imperial College), Rebecca Edwards and Heidi Long demonstrated their raw speed early on. The battle for 3rd was hotly contested by three club-based pairs and a pair from UL.

Sophia Heath and Annie Campbell-Orde, both new to the Leander team set up this season, powered their way through to claim the 3rd spot at the finish line. Susie Dear and Juliet Perry finished 5th followed by Sam Courty and Issy Hawes in 6th. In the B Final Abigail Topp took the win in a composite crew to claim fastest U23 pair.

Heidi Long said: “It was great to be back out racing side-by-side. Amazing to see so many Leander women racing in the A and B finals. Hopefully this is the start of a good season.”

Both Tom Ford and Scholto Carnegie represented Leander in the A Final of this event in composite crews.  This race saw five Tokyo Olympic bronze medallists and their pairs partners battling out for the top spots this weekend. The racing was fast and ferocious to 1500m with only a small margin separating the leading four boats. At the finish line, Tom Ford and Rory Gibbs (OBUBC) took 3rd spot with Sholto Carnegie and James Rudkin (Newcastle) taking 5th place. In the B-Final, Lenny Jenkins of Leander Club took the win followed by Will Stewart and James Robson, both of Leander in second.

On the weekend’s racing Club Captain John Collins said: “The first final trials of the Olympiad is always a great opportunity for the younger athletes to step up and make their mark on the team. It’s great to see how Leander Club athletes have made the most of that opportunity. It’s been a very exciting weekend.”

At the end of the day’s racing the new Director of Performance, Louise Kingsley, took time too not only acknowledge the results of the trials but too also congratulate and present awards to the medallist winning men’s eight and men’s quad for their fantastic results at last year’s Olympic Games in Tokyo.

Leander Club now looks forward to an exciting summer of racing not just at home but also abroad.