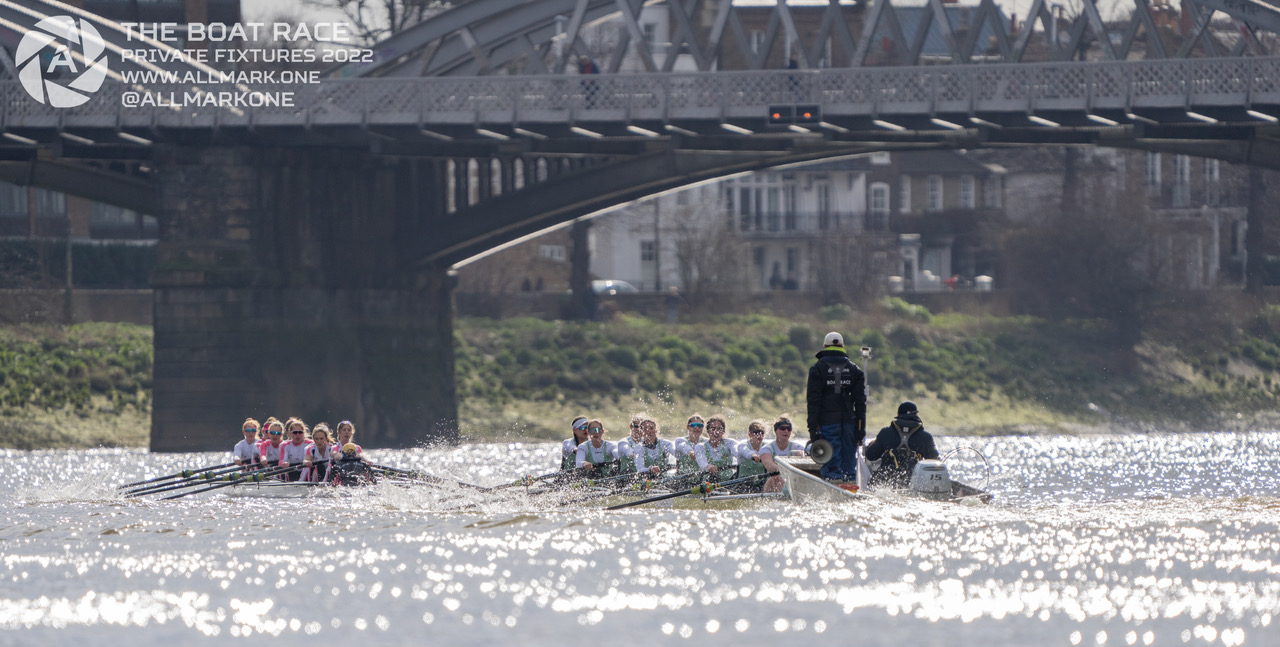 On Sunday 6th March, the Leander men and women travelled to London to race Oxford University and Cambridge University on the Championship course.

Womens’ Race Reports
Two weeks on from the Oxford fixture, it was the turn of the Leander women to race Cambridge University Boat Club.  Weather conditions this time allowed racing to happen over the full Championship Course.

Leander A vs Cambridge A
With one crew change and an adjustment in seating order in the Leander boat, they went up against a very strong Cambridge crew containing an Olympic Champion and other Olympic athletes.

Leander showed their raw power leading Cambridge for the first four minutes of racing.  As the crews exited the Fulham bend and drew level with the mile post, the Leander crew struggled in the rough water which then allowed Cambridge to maximise their station advantage on the Surrey bend.  Cambridge went on to win the first of the two races.

In the second race both crews stayed on their same stations.  Cambridge had the advantage of the last of the Surrey bend and used that to grab a lead over Leander.  However, the gritty determination of the Leander women saw them claw back the Cambridge lead and as both crews approached the finish line at Chiswick bridge Cambridge held on to a small lead to take their second victory of the day.

Leander B vs Blondie
This Leander crew was formed with largely the club development group.  Racing for these crews was taking place over three shorter distances than those of their A crews.  In race 1, Blondie (Cambridge women reserve crew), lined up on Surrey station with the Leander women on Middlesex.  It was clear from stroke 1 that Blondie were not going to be able to match the power of the Leander women.  Over the three races Leander won all of them comfortably.

This racing marks the end of the Leander women’s fixtures against the Boat race crews. Leander Women’s Chief Coach Ross Hunter said: “This seasons fixture’s racing has proven to be exciting and fierce.  We wish both Oxford and Cambridge a smooth run in to the boat race and we look forward to watching the women of both clubs race.”

Our focus now shifts to the Womens Head of the River where Leander will be making history by boating four women’s eights.  More to follow this week on our social media channels.

Men’s Race Report Leander B vs Isis
For this race, Leander boated a very young crew containing lots of our gap year rowers to race Isis. It was always going to be tough as we were up against a strong Isis crew containing 50% of last year’s Blue boat. It was decided by the lead coaches that we would race from Putney to Chiswick Steps in the first race and then after a short break, race from Chiswick steps to the boat race finish line.

In the first piece, our youngsters raced off the blocks very hard and were very competitive for the first half towards Hammersmith, but the strength and experience of Isis showed after that to take them into the lead and the win.

The Isis coach sportingly suggested the Leander crew could start slightly up on the second race and this worked superbly, making it a great battle with our Leander crew keeping contact with Isis for most of the race, but just losing out in the end. It was a great experience for our young rowers who learnt a lot from the day.

Leander A vs Oxford
With our Leander international athletes on training camp the opportunity to race the Blue boat came to our club-based development squad athletes. These crews followed the same plan as the previous fixtures and did two races over the same courses.

The Leander crew were brave off the start and were really pushing the star-studded Blue boat containing many Olympians. As they approached Hammersmith Bridge, the Oxford crew started to pull away and also took advantage of the bend in their favour to take the win.

In the next race, Leander again put up a good fight and held a similar speed to the Blue boat in some parts of the race, as they approached Barnes Bridge, Leander gave everything to keep the overlap and push Oxford wide but unfortunately the Oxford crew were too strong to get past.

We would like to thank Oxford and Isis for the fixture and we wish them all the best for the boat race in a few weeks’ time.

Members are invited to join us at Leander Club to watch all the Boat Race action live on the big screen on Sunday 3rd April. Families welcome, guest beers on tap and no booking required.