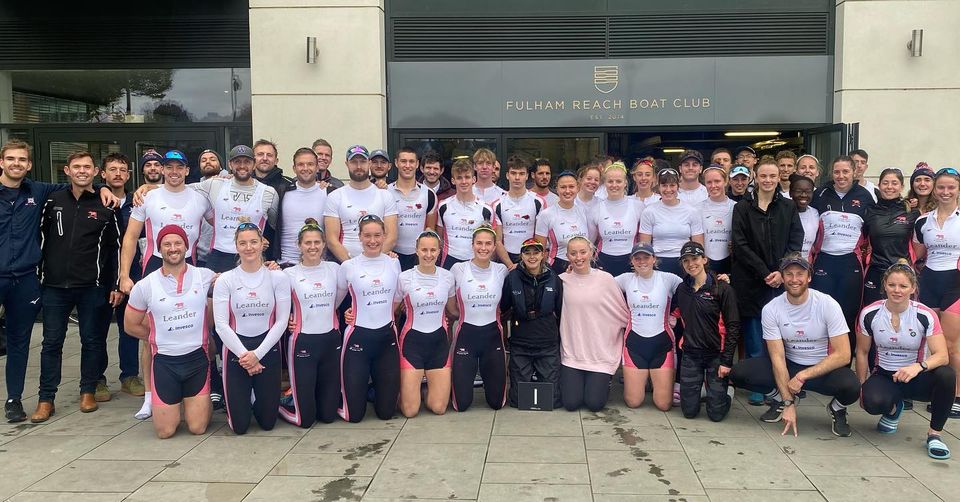 On the 13th November, Leander took 13 crews to the Fours Head of the river. This was the first time the event had run since 2019 and a total of 410 crews were entered in this year’s event.

The field was led by Leander’s top quad, who were the first to cross the line, not only winning their event pennant but also taking the fastest time of the day. This was only the start of what turned out to be a very successful Fours Head of the river campaign. The quad comprising of Harry Leask, John Collins, Tom Barras and Jack Burns finished 8 seconds ahead of a composite crew. Leander’s second and third men’s quad finished 3rd and 4th respectively in this event.

The women’s quad of Natasha Harris-White, Georgie Brayshaw, Imogen Magner and Lola Anderson started second in their event. Steering from the stroke seat and fresh off her first win at the previous weekends GB trials, Lola led her crew to a 6 second victory and fastest women’s time of the day, over a composite crew. Leander’s second women’s quad in this event finished 3rd.

Next up, it was the turn of our returning Olympians Tom Ford, James Rudkin, Matt Rossiter and Jacob Dawson in the Men’s coxless four. Against tough opposition, Leander placed 1st, 2nd and 5th in this event. This showed the start of an encouraging strength and depth in our men’s sweep squad.

The women had 2 boats in the women’s coxless fours event. The result of the day came in this event with our athletes Sophia Heath, Sam Redgrave, Hope Cessford and Annie Campbell-Orde. Live timing during the race at different markers could barely split this crew and the Cambridge crew containing 3 Tokyo Olympians of which one is an Olympic champion. However, these Leander women showed grit and determination to win this event by 3 seconds. The second coxless fours in this event finished in 3rd place.

Leander also fielded 2 women’s coxed fours. The first boat coxed by Morgan Baynham-Williams with athletes Esme Booth, Lauren Irwin, Heidi Long and returning Olympian Chloe Brew, won this event clearly over their closest competition by 13 seconds. The second crew finished 5th in this event. These Leander women’s crews continued to cement their dominance across the board in all events domestically.

Finally, the Leander junior quad finished in a respectable second place in the junior quads event, which placed them 17th fastest crew of the day.

This was an excellent day of racing and performances for our Leander athletes. Jack Beaumont, Leander club captain, who came to watch the day’s racing commented “It was great to come to the Fours Head with a strong mix of club athletes and Olympic medalists. All of our crews performed exceptionally and I think that we have had a great start to the season. I’m looking forward to our crews building on this strong performance with some tough winter training over the next few months”.

We at Leander would like to thank Fulham Reach Boatclub for their hospitality and all the volunteers of the Fours Head for running an excellent event.