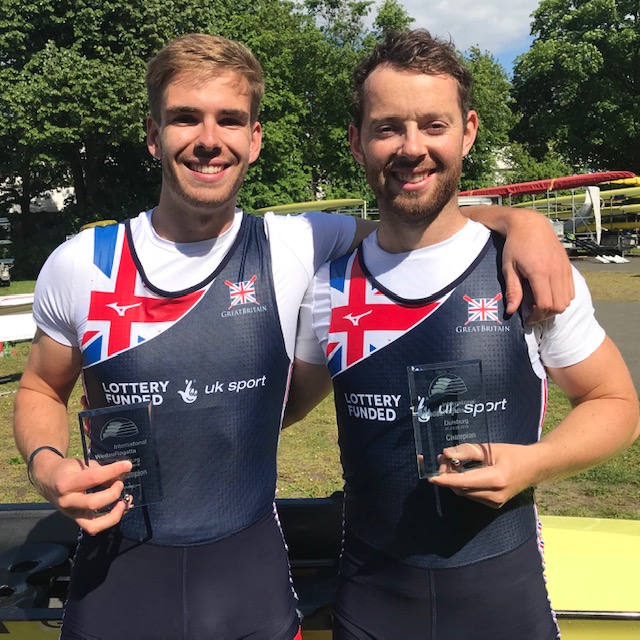 Following some strong results at the recent GB Final Trials many Leander development athletes were selected to represent Great Britain at the International Wedau Regatta in Duisburg, Germany.

Harry Glenister and George Rossiter continued their run of good form in Duisburg by taking 3rd on the Saturday and an outstanding gold medal on Sunday beating the French pair who medalled at last year’s senior world championships.

Annie Withers and Sam Courty were selected to race the women’s pair and took full advantage by winning gold on Saturday by clear water. On Sunday they were unable to repeat this but still managed a creditable 2nd place.

Susie Dear, Natasha Harris-White and Morgan Baynham-Williams were selected to race in a GB women’s development eight and took gold on both days in style.

Georgie Brayshaw and Ruth Siddorn were selected to race in the women’s double scull. They raced well against strong opposition coming 4th in the B final on Saturday and narrowly missing out of the finals on Sunday.

Victor Kleshnev and James Cartwright were selected to race in the under 23 double scull. Their event was mixed in with the senior event, so the opposition was strong. They raced well on the Saturday, unfortunately missing out on the B final by less than a second. They put this right on the Sunday, qualifying for the B final and achieving a well-deserved 2nd place.

Sholto Carnegie and Tom Jeffery of Leander were racing in the men’s four for GB who came second on Saturday and took gold on Sunday with a impressive win against senior athletes from strong European nations.

Also racing in Duisburg was the Leander men’s eight who qualified for the A final on both days. On Saturday the crew had their best result coming second to the German national eight by 4.7 seconds. On Sunday they came home in 4th place.

After serious injury Olympian Stuart Innes has been fighting and rehabbing for the past two years to get back to fitness so he can return to competition. This weekend Stuart was racing in the single scull.

Although Stuart has a fantastic career of results behind him this weekend was much more about enjoying it and seeing where he stands against others as his first race back. Stuart raced well although a bit rusty off the start, was happy to secure a place into the B final on Saturday and impressively making the A final on Sunday.

From Duisburg the trailer headed straight to Banyoles, Spain where the Leander athletes will be on training camp for the next two weeks. Training will be hard and will build on the lessons learnt in Duisburg. With less than two months to go till Henley Regatta the summer racing season has officially started.